Is the public still easily persuaded by government opinion?


When I attended QT some years ago, Boris Berezovsky was on the panel. Not long after (2013) he was found hanged in his bathroom! Suicide was the decided cause, though I have to say he gave not the slightest hint of this when on the programme.

At the time I submitted the following question that was not chosen: "Has a new 'Iron Curtain' descended over Europe?" It, or something like it was chosen seven years later. It illustrates how this anti-Russian theme has been developing for a long time, mainly pushed by America. Why?  Because Russia is the only power standing in the way of its essentially Zionist plans in both Syria and the Ukraine.

If a QT audience is representative of the British public at large, this programme seems to indicate it has learned nothing from 9/11, Iraq War, 7/7 and all the other dubious 'terrorist events' that have occurred since.

There is obviously a huge difference between agreement that a particular act is reprehensible and deciding who or what is responsible for it. It is an old and well tried trick to emphasise the former to obfuscate the latter and imply that everything is a foregone conclusion.

Subsequent information suggests very little of what has been claimed by the government is reliable yet the majority of the panel did not reflect this. In fact the only one to approach the issue in a rational and even-handed manner was the RT commentator, Afshin Rattansi. Of course for his pains he was pooh-poohed and marginalised by both panel and audience. Only time will tell, as with the unfortunate Berezovsky, who came nearest the truth.

'Novochok' poison was not made in Russia and Russian stocks of chemical weapons were destroyed under international supervision.

The scientist who claimed knowledge of the same, moved to America many years ago and published the formula in a book published in 2008, so virtually any half-competent lab could potentially make it.

The claim that it was identified so quickly, if indeed it was, would mean that Porton Down must, at the very least, have been aware of the material, if not possessed it. How could this fact be intrinsically denied by the PM by saying only Russia had it?

The London Times stated 40 local people had been hospitalised. Not only has this been specifically denied by Salisbury Hospital, it turns out not ONE person was hospitalised!

Doesn't this count as "Fake News", apparently only the province of the Internet?

As far as the Skripals are concerned, we have been told virtually nothing about their condition or indeed how, if the poisoning occurred in the home or car, they could be shown fit and well less than half an hour before they were found on the bench.

This is but one of many significant details not provided even to the Russians themselves and secrecy in such matters often suggests deceit.

As to jumping to the conclusion that Putin was personally to blame before any concrete evidence was available, runs contrary to the most basic rules of justice and common sense, particularly when all the circumstantial evidence points against it.

There was plenty of time to kill Skripal whilst still in Russian custody if that had been the intention.

Why would he have been released early in exchange for spies in America?

Why kill him once released as this would serious prejudice future exchanges?

Why carry out an assassination just before the Russian Presidential elections?

Why use, as the government claims, a chemical agent that would incriminate Russia specifically?

Why target Skripal's daughter as well?

Why use a tricky nerve agent when a bullet or 'suicide'  would be much more certain and direct?

These are just a few of the many questions that were not posed or answered in the Question Time programme.

Nor was the very real possibility discussed, that other agencies were responsible to create the very situation of demonising Putin and Russia as we have seen.

Skripal we are told was recruited by the British but he may have remained an agent of Russia. He was closely connected to Miller and Steele we are told, employees of the Foreign Office who recruited and 'ran' him, the latter discredited for his attempts to frame Trump.

Yet despite all this the public, if QT can be relied upon, is happy to accept the simplistic government line without question or demur.

That is not only naive, it is highly dangerous.

When I attended QT some years ago, Boris Berezovsky was on the panel. Not long after (2013) he was found hanged in his bathroom. I submitted a question then, that was made in this programme: "Has a new iron current descended over Europe?" It illustrates how this anti-Russian theme has been developing for a long time, mainly pushed by America because Russia is the only power standing in the way of its plans in both Syria and Ukraine. 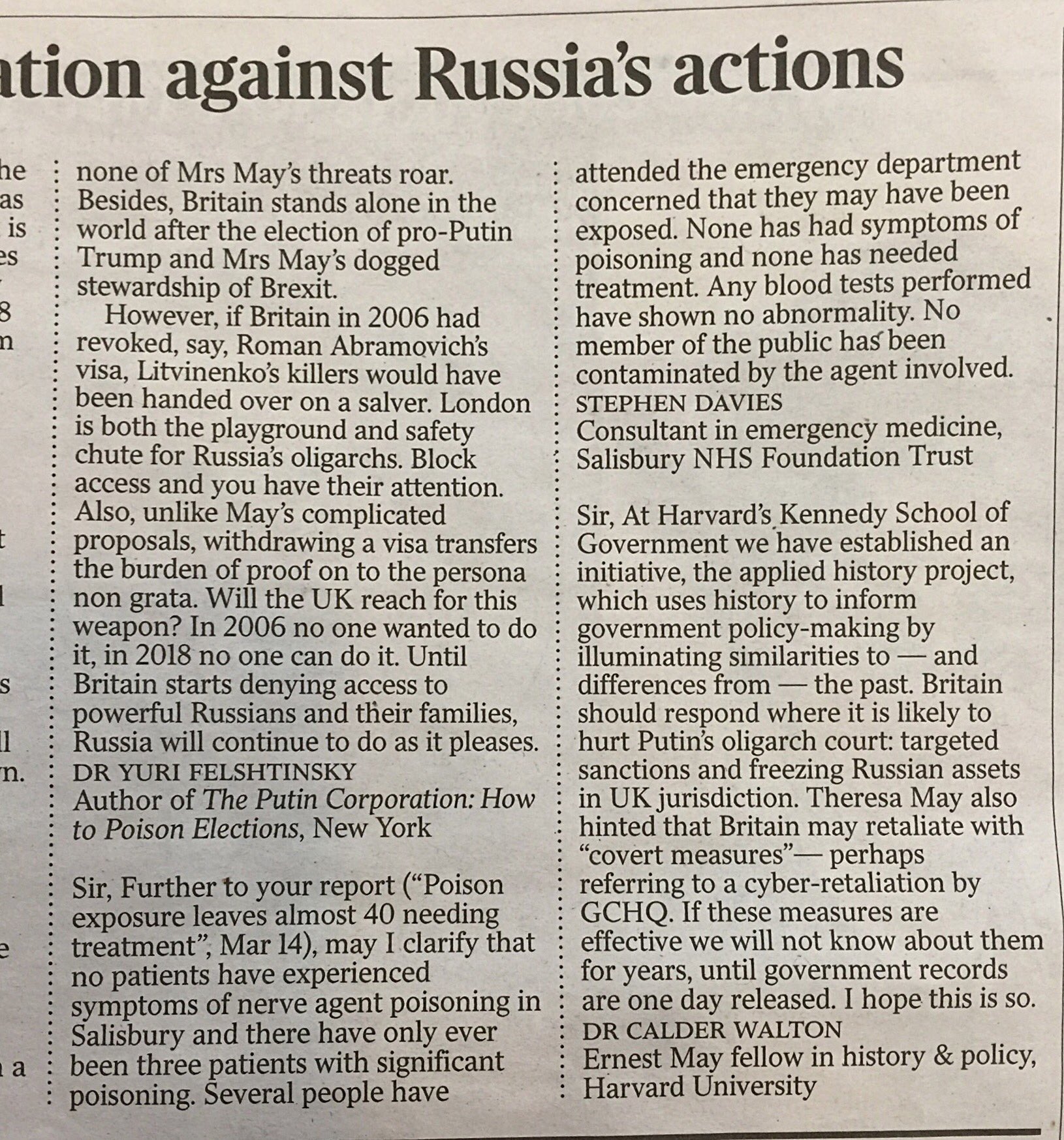