A discussion of safety issues in relation to the disastrous Grenfell Housing Tower fire
by Tim Veater. 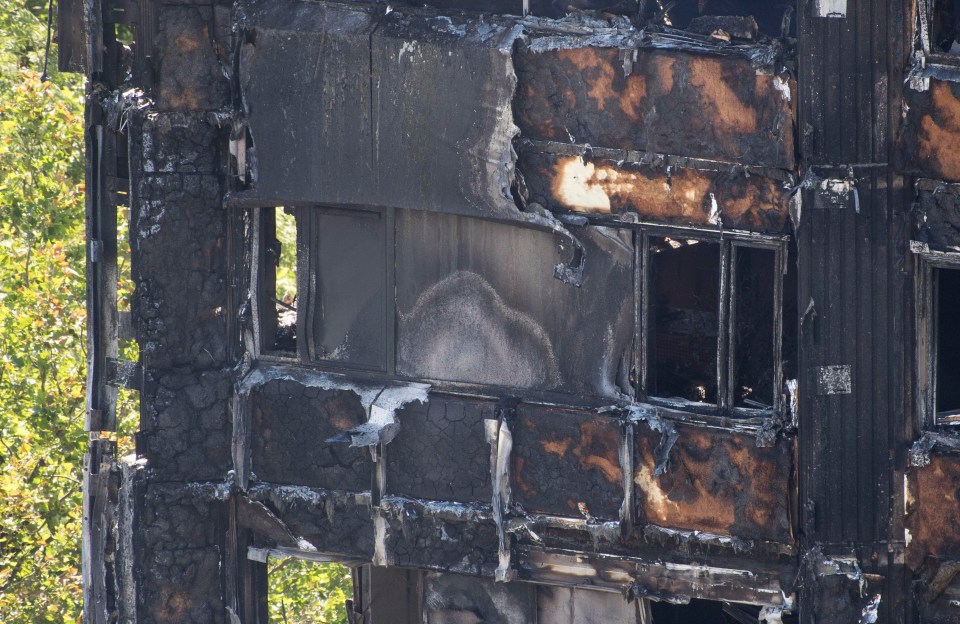 For my sins, I spent many years involved in issues peripheral and central to the fire tragedy that swept the Kensington and Chelsea block of flats. This included the investigation of a number of fatal incidents including domestic fires but nothing on the scale of the tragedy that unfolded at Grenfell House, a 24 storey block of flats, housing somewhere between 400 and 600 people, of mainly multi-cultural background.

Amidst the confusion some 30 have been confirmed dead but many more are missing and presumed to have died. The inferno will undoubtedly go down in history as one of the worst social disasters to hit London and Britain. The question on everybodies' minds and demands an answer, both as to cause and consequences is, "was it inevitable or preventable?" and of course "what and whom are chiefly to blame?"

Contrast between Media Treatment and Reality.

The first thing I would like to flag up is the contrast between the treatment by press and media and the reality. Can we avoid the conclusion, although we the public rely on the former for the facts, the information industry treats such incidents with alacrity, for whom it affords excitement and spectacle.

The reality of the event, physically, sensually and emotionally is never adequately represented. The sight and smell of a burnt out dwelling is hard to describe or replicate, as is the emotional devastation of losing a loved one or seeing desperate people one cannot help, consigned to fate.

There is also the contrast, highlighted by those interviewed, between the interest shown by the media to the disaster, whilst totally ignoring all the pleas for help when prior to it, concerns were being expressed.

The media comes to the event with its own agenda to produce dramatic images and emotional scenes, but studious avoids real analysis and penetrating insight. Interviewers such as Jon Snow and Victoria Derbyshire to name but two, are seen apparently trying to moderate and direct irate opinion, and this is only what we see broadcast. The role of the editor and what he rejects, is of course never revealed.

Whatever the truth of the assertion above, there is no doubt that the political ramifications of the tragedy are already apparent, and particularly the contrast of approach by the two political party leaders, and only recent contestants, Theresa May and Jeremy Corbyn. Fresh from her disastrous election campaign, in which she came over as emotionally remote, uncommunicative even with her own ministers, afraid of confrontation and vacillating, she appeared to have learnt nothing in dealing with the Grenfell disaster. In stark contrast, Jeremy Corbyn who, who went out to meet those affected, and was even photographed with a comforting arm around them. By his demonstrated empathy, he has etched his "for the many not the few" and a "kinder sort of government" in the hearts of a sizable proportion of the electorate and far more than just a slogan.

We may ask who is advising Theresa May now that two of her most important jumped ship before they were pushed? Has she, or they, learnt nothing about the important of image to message? We are told the reason she met none of the directly affected was to do with "security concerns." So the Prime Minister, with all the security assistance at her disposal is afraid of meeting ordinary people in the smartest part of London? Hardly Churchill climbing over the Blitz devastation in the East End is it? It may well prove to be the final nail in her reputational political coffin.

In any fire, in fact in any serious incident, it may be stating the obvious to point out there are two basic areas of examination: how it started and what happened thereafter? In both instances it is necessary to investigate the historical causes that involve both human and technical factors. So applying this framework, what do we know about how this disaster occurred and why did so many perish? 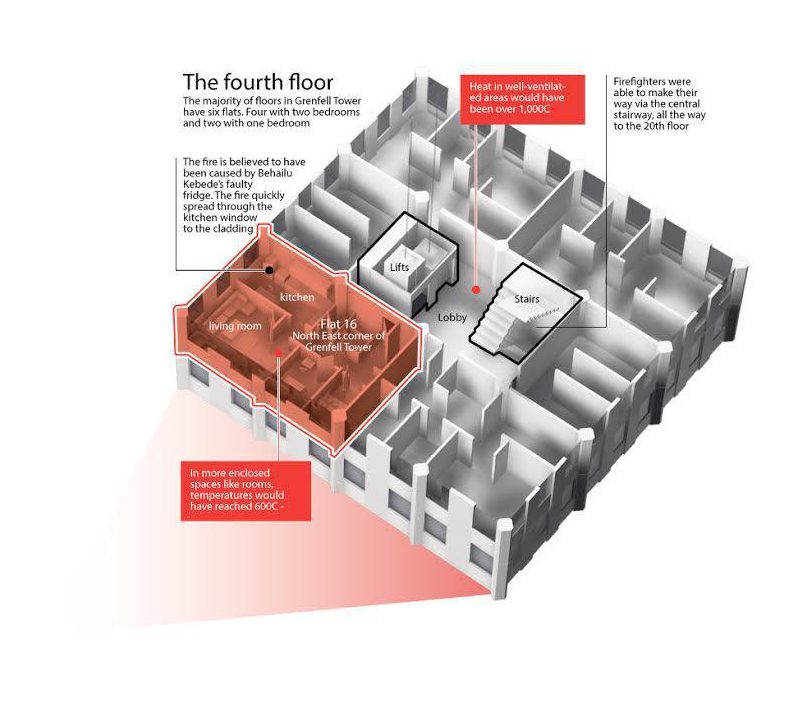 
What Happened at Grenfell?

We are told that the blaze started from a relatively small fire in just one fourth floor flat and that it subsequently spread to recently installed external cladding that patently was not flame retardant and thence back into all the apartments affected.

Even were this the case, there is still the question why people did not access the one escape route that should have remained protected from fire and smoke in the flats? It is significant that those that did, survived. Many of those that did not leave their accommodation, in accordance with the standing instructions, perished.

The Source of the Fire

Apparently the fire started with an exploding refrigerator. Investigators will want to know how this happened but if true, it is likely that it followed previously reported cases, in which the 'green' replacement highly flammable refrigerants isobutane and propane are employed.
(1)

If these leak, any spark, as for example when the thermostat or light cuts in, the flammable gas can be ignited. In 2009, Samsung recalled thousands of such appliances following coolant explosions. (2) This would normally only cause structural damage but fire could also result. We do not know, but it is possible that if this happened, the window was also blown out allowing fire to escape and involve the exterior cladding.


The person involved has been identified as 44 year old taxi driver, Behailu Kebede originally from Ethiopia. It is reported that just before 1.00 am he raised the alarm to his neighbour. The alarm was raised with emergency services at 12.54 am. Firemen were at the scene within six minutes but were faced with an almost impossible situation with large segments of the exterior facade alight and blazing fiercely.

We do not know precisely the time of the explosion but we must assume Mr Kebede reacted immediately to the danger but there are rather disturbing reports that he was able to pack a suitcase before leaving. The Sun reported as follows (3):

His next-door neighbour Maryann Adam, 41, said: “He knocked on the door and he said there was a fire in his flat.
“It was exactly 12.50am because I was sleeping and it woke me up. When we got up, I saw his luggage outside his flat, there was a big bag with his clothes.
“The fire was small in the kitchen. I could see it because the door was open. There was no alarm.”
Fire crews were alerted at 12.54am and arrived within six minutes but found the inferno had spread outside the building, roaring towards the 24th floor.

Apparently, and to be expected, Mr Kebede is distraught that by no fault of his own, a fire that started in his apartment spread so quickly and disastrously to the rest of the building. We must assume that he quickly grabbed his belongings before leaving and put them in an hold-all - but of course if preparations were already made for leaving, issues are raised that should be answered particularly in relation to the time that elapsed between 'explosion' and leaving the flat.

The next issue raised by this account relates to alarms and any attempt to fight the fire initially. It would appear in both instances the answer is in the negative.

The block is apparently provided with no general fire alarm system on the basis that fire could always be contained within the respective flat and that a greater danger would be created if people attempted to leave en-mass, particularly in case of false alarm, a major problem in such installations.

However the absence of any alarm sounding is more problematic, as every flat should be fitted with both hard wired heat and smoke alarms, particularly as it had a major refurbishment only a year before. So why did this not operate at least in the flat affected?

The critical question is therefore:

Would it have made any difference if it had is a secondary question? As the explosion had, or would have awoken the resident anyway, it is probably an academic question in this instance but of course more generally it can save life if people are asleep. Whether it can assist in alerting other flat occupants depends on whether it can be heard. Even if it can be, there is still the psychological factor. People are notoriously reticent to react to alarms unless fully advised as to context.

Then as far as fighting the fire initially, this appears not to have happened and the question is "why?" If as the neighbour states it was relatively small when she saw it, prompt initial treatment with a dry powder or CO2 extinguisher may well have put the fire out. Such action can prevent much worse consequences but it depends on two things: 1. the appliances with which to do it; and 2. the knowledge and skill of how to do it.

Historically such premises have been provided with extinguishers, either to the flats or common parts, or both, that can be effective in this regard.

I have personal knowledge of how Housing providers can view this provision as costly and inconvenient, as they have to be checked and maintained, and seek to remove them. The safety case for their provision may not always win out over economic ones.

The pertinent questions therefore are:

As can be seen from the above diagram, in the centre of the block there is a fire protected stairwell and lift shaft.

At least one self closing fire door providing at least half an hour fire resistance should be provided between flat and this protected staircase. In fact in a refurbished flat I would expect two such.

So it is with some concern that I note the witness reported she could "see inside the flat".

Was the door self closer disconnected, not working properly or was the door propped open? Any of these would raise a major threat of smoke and heat entering the stairwell and compromising its function as a fire, heat and smoke-free escape route.

The Lift and Stairwell.

Although the lift should not be used in case of fire, the stairs should provide a safe route for orderly evacuation where required. As soon as occupants became aware of fire outside their windows, they should have, without delay, made their way to and down the stairwell.

One cannot escape the conclusion that at least in part this may have been influenced by the standing advice to remain in the flat which in many cases was a fatal choice.

Now as regards lighting, any fire alarm or interruption in power should operate emergency lighting in the common areas as an obvious safety precaution. If people endeavour to leave by this route in haste they need to be able to see. The reports indicate this did not happen and people had to feel their way in darkness. It is reported that at least one child was lost as a consequence. So the question is:

The current relevant legislation (4) requires every location/business operation where staff are employed to have a current fire risk assessment specifying all the technical and management steps that need to be taken to reduce risk of fire and its consequences.

Apparently there have been numerous formal complaints to the management body regarding these matters with little practical result.

So the question is, did the Housing Association fulfill its legal and ethical responsibilities in this regard?

It should be noted that the Health and Safety Act allows for criminal prosecution of individuals and directors in appropriate cases.

(Hopefully I will discuss the important issue of the external cladding and various other issues in a further article.)