The world of information, and who controls it, is very important to the power brokers. Not since Caxton have the reins been so challenged by the Internet and the Controllers are desperate to turn back the tide but it is proving problematical. That is where the "Fake News" meme is coming from, and the BBC is a main exponent of it, therefore we may assume it will do all it can to support the fiction. Its treatment of people like Max Spiers should be viewed in that light.

As we have seen in the past, as with its disgraceful treatment of the 9/11 and 7/7 issues (and later ones) its ostensible purpose to objectively investigate is no such thing. It is in fact quite the opposite: to undermine the objectors to reinforce the (fake) official story-line.

Now as regards Max Spiers I haven't seen the BBC programme so I cannot comment on it directly but I am immediately suspicious by the fact that the 'BBC Big Wigs' have obviously approved the resources for the project and allowed it to be broadcast. Only those that have watched it can judge as to its overall direction and impact.

I did not know Spiers personally and have not followed him assiduously. I have however watched a few of his presentations and interviews including one not long before his untimely and rather suspicious death. I have to say that I found it difficult to follow what he had to say in any rational or coherent way. I am not sure he knew either but perhaps I am being unfair and others have a clearer view of what he was actually propounding or revealing. I am open to instruction by those that know better.

However, if I am right I think this might explain why the BBC might choose him for a documentary because if it projects a 'conspiracy theorist' with little to support his views, its effect is to undermine all such and to dismiss it out of hand as just an example of the 'fake news' it is campaigning against. 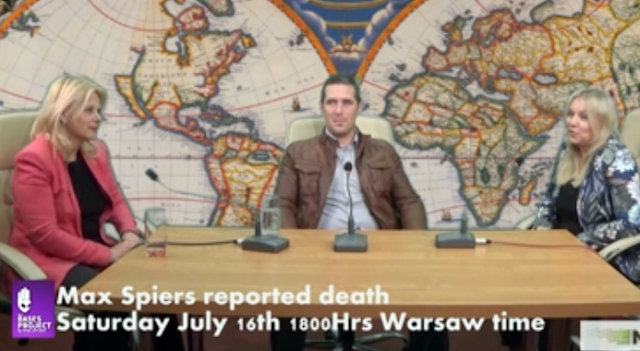 This is a response from someone who watched it and I have to say (now I have watched it too) I think they have a point.


cian loughnane18 hours ago (edited)
What a load of film school bollocks! The mainstream (fake) media at it's finest folks! An absolute load of fake crap wrapped in a smear campaign! Conspiracy Theorist?? What an insult to such a brave man!! This is a load of un researched (no mention of MK Ultra and associated projects/operations Max was involved in, or interviews with fellow associates like James Casbolt!) lazy, half arsed bollocks posing as journalism! The BBC!! What an absolute joke and disgrace to intelligent researchers the world over! This absolutely boiled my blood!! This presenter is a daft little child who should be working in Tesco though she's probably too lazy to get a job there no doubt! You childish, lazy bunch of hacks! Useless!! Do not waste your time watching this turkey!! My views aside, it's also a total yawn and really badly put together. There's no hot pursuit journalism like adopting (expected) journalistic practise to get into the conference, No then the assumption that they think they're (the conference organisers) too afraid to let these "Hard asses" (I could die laughing) in!! "The Voice" is more cutting edge than this folks, do not waste your time on this total piece of crap... seriously!﻿
4


Having watched the BBC programme, I am somewhat gratified that I don't believe anything in my initial assessment requires editing. In fact think the programme rather supports it. I and I assume others, come away from it thinking something strange went on in Poland in connection with his death, but that Spiers likely contributed to it by an admitted drug habit within the context of a psychotic and paranoid personality. Further that he was part of a wider group of "conspiracists" - clearly quite mad and unreliable all of them.

Elements of this unspoken inference may or may not be true. Spiers claims about himself may be exaggeration, untrue or the product of a drug induced unsound mind, or they may not be. As his claims were never properly examined, it is clear what the programme makers thought and wanted the viewer to think. Basically that Spiers was irrational and not worth listening to or even debunking. And by extension, that those "conspiracists" associated with him, were tarred with the same brush. This was rather confirmed by one individual who claimed any dead person could be resuscitated for up to six hours, and another who thought it possible that Spies might himself return to life.

But even if we leave this criticism aside, the programme makers, and by this I assume we must mean those credited at the end ( Katie Spedding, Production Coordinator; James Stewart, Researcher; Trace Taylor, Film Editor; Alison Gee, Executive Producer; Jeremy Skeet, Editor; India Rakusen, Producer) did not even achieve a modicum of clarity regarding the circumstances surrounding his death or cause of it. It is not altogether clear who the interviewer is from the title or credits. Where was the attempt to establish an exact time line, who actually attended, when he was admitted to hospital (if he was), interview with doctors and emergency crew, biographical background of his interviewers and hosts?

Right at the beginning an unidentified official (strange!) states they were unable to carry out a post mortem, which close to death may have provided some certainty as to cause, but no explanation is given for this failure.

The only Polish interviewee spoke in generalities about "conspiracy theorist", confirming they were a danger because not only were they naturally more more fearful and doubting but that they encouraged these damaging attitudes in society at large.

Ah! Here I think we have the nub and real intention of the programme. Purveying a real example of "fake news" that will have the effect of undermining any that seeks to question the official narrative of events. If it was, I think for a lot of people it might have succeeded.

India Rakusen's 'Linked In' profile is reproduced below.

It's estimated that up to 200,000 women are carrying out their own abortions in Texas, a state in which the procedure is actually legal. But a controversial law has forced clinics to close, making abortions less accessible. As the future of what many see as a restrictive law hangs in the balance, reporter India Rakusen finds out why 23-year-old Eliza opted to cross the border into Mexico and take matters into her own hands.

Produced and presented this half hour doc for BBC World Service. Exploring what life is like for some of the migrants arriving in Germany. It follows the stories of two people in particular. Ali from Afghanistan and Alaa from Syria.