Announcement delayed a month. Why?

The emission was rumored(sic) to have originated close to the Arctic circle, with some speculating that a nuclear test of emergency had taken place in Russia in January and the fallout then spread to Norway and onward to Europe:

"Iodine-131 a radionuclide of anthropogenic origin, has recently been detected in tiny amounts in the ground-level atmosphere in Europe. The preliminary report states it was first found during week 2 of January 2017 in northern Norway. Iodine-131 was also detected in Finland, Poland, Czech Republic, Germany, France and Spain, until the end of January", the French Institute de Radioprotection et de Süreté Nucléaire wrote in a press release.


Adding an air of mystery to this alleged "incident" was the spotting of the "Constant Phoenix", which as we first reported, arrived on Friday in the UK's Mildenhall airbase from Florida. The WC-135 Constant Phoenix has been used in the past to determine whether nuclear tests or detonations have taken place in any given region. The WC-135 is a derivative of the Boeing C-135 transport and support plane. Two of these aircraft are in service today out of the ten examples operated since 1963. The aircraft are flown by flight crews from the 45th Reconnaissance Squadron from Offutt Air Force Base while mission crews are staffed by Detachment 1 from the Air Force Technical Applications Center.


Oh! So who's releasing radioactic iodine into the European atmosphere now?


From: https://toxnet.nlm.nih.gov/cgi-bin/sis/search/a?dbs+hsdb:@term+@DOCNO+7395
Toxicity Summary: There are 36 isotopes of iodine having masses between 108 and 143. Only one isotope is stable (iodine-127); the remaining are radioactive. Most of these have radioactive half-lives of minutes or less. Twelve have half-lives that exceed 1 hour, and six have half-lives that exceed 12 hours (iodine-123, iodine-124, iodine-125, iodine-126, iodine-129, and iodine-131). Four isotopes (iodine-123, iodine-125, iodine-129, and iodine-131) are of particular interest with respect to human exposures because iodine-123 and iodine-131 are used medically and all four are sufficiently long-lived to be transported to human receptors after their release into the environment. The U.S. population has been exposed to radioiodine in the general environment as a result of atmospheric fallout of radioiodine released from uncontained and/or uncontrolled nuclear reactions. Historically, this has resulted from surface or atmospheric detonation of nuclear bombs, from routine and accidental releases from nuclear power plants and nuclear fuel reprocessing facilities, and from hospitals and medical research facilities.

It appears to be linked to pharmaceuticals.
BEC CREW

Small amounts of nuclear radiation spread across Europe last month, and no one can figure out why.
First detected over the Norway-Russia border in January, the radioactive Iodine-131 bloom was then found over several European countries, and while unsubstantiated rumours of nuclear testing by Russia have been cropping up, officials say it's most likely linked to an unreported pharmaceutical mishap.

While the radiation spike happened in January, officials in Finland and Francehave only just gone public with information on the incident, announcing that after the spike was detected in Norway, it appeared in Finland, Poland, Czechia (Czech Republic), Germany, France and Spain, until the end of January.
When asked why Norway didn't inform the public last month, when it was the first to detect the radiation in its northernmost county, Finnmark, Astrid Liland from the Norwegian Radiation Protection Authority told the Barents Observer:

"The measurements at Svanhovd in January were very, very low. So were the measurements made in neighbouring countries, like Finland. The levels raise no concern for humans or the environment. Therefore, we believe this had no news value."

As France's nuclear safety authority, the IRSN, announced last week, the actual amount of radioactive Iodine-131 in Europe's ground-level atmosphere in January "raise no health concerns", and has since returned to normal.
But what's most disconcerting about the event isn't the level of radiation that spread through Europe - it's the fact that no one can say what actually happened. Iodine-131 (value +/- uncertainty) in the atmosphere. Credit: IRSN
What we do know is that Iodine-131 has a half-life of just eight days, so detecting it in the atmosphere is proof of a recent release.
"The release was probably of recent origin. Further than this, it is impossible to speculate," Brian Gornall from Britain's Society for Radiological Protection told Ben Sullivan at Motherboard.Right now, the best bet is that the origin of the radioactive Iodine-131 is somewhere in Eastern Europe - something that conspiracy theorists have latched onto as evidence that Russia performed a nuclear test in the Arctic.
But there is no evidence of this taking place, and the fact that only Iodine-131 - and no other radioactive substances - were detected strongly suggests this is not the answer.
"It was rough weather in the period when the measurements were made, so we can't trace the release back to a particular location. Measurements from several places in Europe might indicate it comes from Eastern Europe," Liland told the Barents Observer.
Based on the particular isotope, experts are saying it's far more likely that the radiation spike is the result of some kind of pharmaceutical factory leak, seeing as Iodine-131 is used widely in treating certain types of cancer.
"Since only Iodine-131 was measured, and no other radioactive substances, we think it originates from a pharmaceutical company producing radioactive drugs," Liland told Motherboard. "Iodine-131 is used for treatment of cancer."
And, oddly enough, the case for pharmaceuticals being behind the mess has a surprisingly similar parallel to back it up - an almost identical event occurred in 2011, when low levels of radioactive Iodine-131 were detected in several European countries for a few weeks.
At the time of the announcement, officials were also at a loss to explain the spike in Iodine-131, but quickly ruled out a link to nuclear power plants.
"If it came from a reactor we would find other elements in the air," Didier Champion, then head of environment and intervention at the IRSN, told Reuters in 2011.
Interestingly, a paper came out just last week confirming that the source of the 2011 Iodine-131 leak was a faulty filter system at the Institute of Isotopes Ltd in Budapest, Hungary, which produces a wide variety of radioactive isotopes for medical treatment and research.
The investigation is still ongoing for the 2017 leak, with the US Air Force deploying its WC-135 nuclear explosion 'sniffer' aircraft to the UK last week to help narrow down the source.
Hopefully researchers can nail down what exactly happened here, so factory owners - if they are to blame this time around - can ensure these kinds of leaks don't continue.
Because while both events posed no health risk to humans, it's really not something any manufacturer should be risking.

The human body is surprisingly good at absorbing iodine and storing it in the thyroid gland. That’s a problem when iodine-131 is released into the atmosphere. The thyroid stores it as readily as natural, non-radioactive iodine. As iodine-131 builds up in the thyroid gland, it emits bursts of radiation that can damage DNA and other genetic material. Such damage can remove the normal limits to cell growth and division. Unchecked growth of thyroid tissue is thyroid cancer.

Iodine-131 gets into the body several ways. A person can breathe in radioactive steam released by a nuclear power plant. Fallout—radioactive particles that fall out of the atmosphere and settle onto plants, soil, and water—further adds to the burden when a person eats iodine-131 enriched fruits and vegetables or drinks water containing the isotope. Milk is another vehicle—cows that eat grass sprinkled with iodine-131 make milk that contains it.

Following the explosion and meltdown of the nuclear reactor at Chernobyl in 1986, follow-up health studies showed a significant increase in thyroid cancer in the area around Chernobyl, especially among children who were under 10 years old at the time of the explosion and those in utero. Youths may be most affected by iodine-131 because their thyroid glands are still growing and developing. Fortunately, as cancers go, thyroid cancer is one of the least deadly. In the United States, only about 5% of people who develop thyroid cancer die of the disease. (Researchers aren’t yet sure if this applies to radiation-induced thyroid cancer.)

As my colleague Peter Wehrwein describes in a related post, taking potassium iodide pills can help keep iodine-131 from taking up residence in the thyroid gland. The seafood-rich Japanese diet provides an abundance of iodine. Because the thyroid glands of those affected by fallout from the failing nuclear power plants may be “full” of natural iodine, iodine-131 may not be able to get into the gland, giving them natural protection against radiation-induced thyroid cancer.

and then of course there is this ongoing catastrophe with the actual potential to make all sea food radioactive and if not inedible, highly dangerous to eat. Yes folks no more 'fish and chips'! 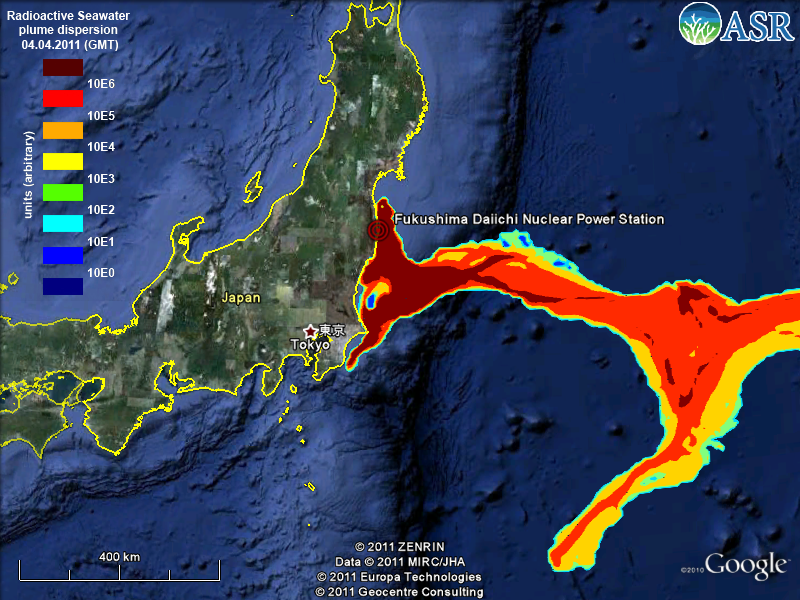 Why has there been no INTERNATIONAL response to this potentially life ending disaster? 
INVISIBLE FUKUSHIMA HEAVY METAL RADIOACTIVE
POISON SHOWED UP IN US DRINKING WATER AND AIR,
BUT NO ONE WAS WARNED OR TOLD TO TAKE ANY
PROTECTIVE ACTIONS
Posted by Veaterecosan at 08:14