Well I never did! Here we go again. All the familiar features. The following has just been posted on my FB feed. It saves me typing similar but not necessarily identical observations so I will republish it here for what it is worth.

Of course such is the overwhelming public sentiment evoked by even the suggestion of targeting children with an explosive device, that it is almost impossible to remain calm and objective about what went on. But as now seems to be common-place with these events, only the official narrative is pushed by the media, and this comes direct from 'official' sources, in which we are encouraged to have complete and unquestioning confidence. This is despite a mountain of evidence from past incidents that this may not be justified.

As usual "an on-going investigation" is used to obscure any fact that needs to be hidden or uninvestigated; the "lone wolf" and "we can't be expected to predict or stop every determined suicide bomber" as the reason it could not be intercepted; inconvenient facts and details are never explained; the inquest process is manipulated to hide possibly incriminating detail on the back of "no need" or "too disturbing for the jury to witness" (we shall have to see if this happens); no criticism is allowed of the agencies that are charged with prevention, despite being at least fully aware of the individuals involved, if not implicated in the events themselves; it all happens amazingly timed to influence international gatherings - in this case not only a NATO summit in Brussels three days later but one at which the USA President Trump attended at the end of his 'Middle East tour', followed by a meeting of the 'G7' on Saturday!

Unmistakable 'pink' and child theme to event and incident whilst being a "Dangerous Woman" tour. 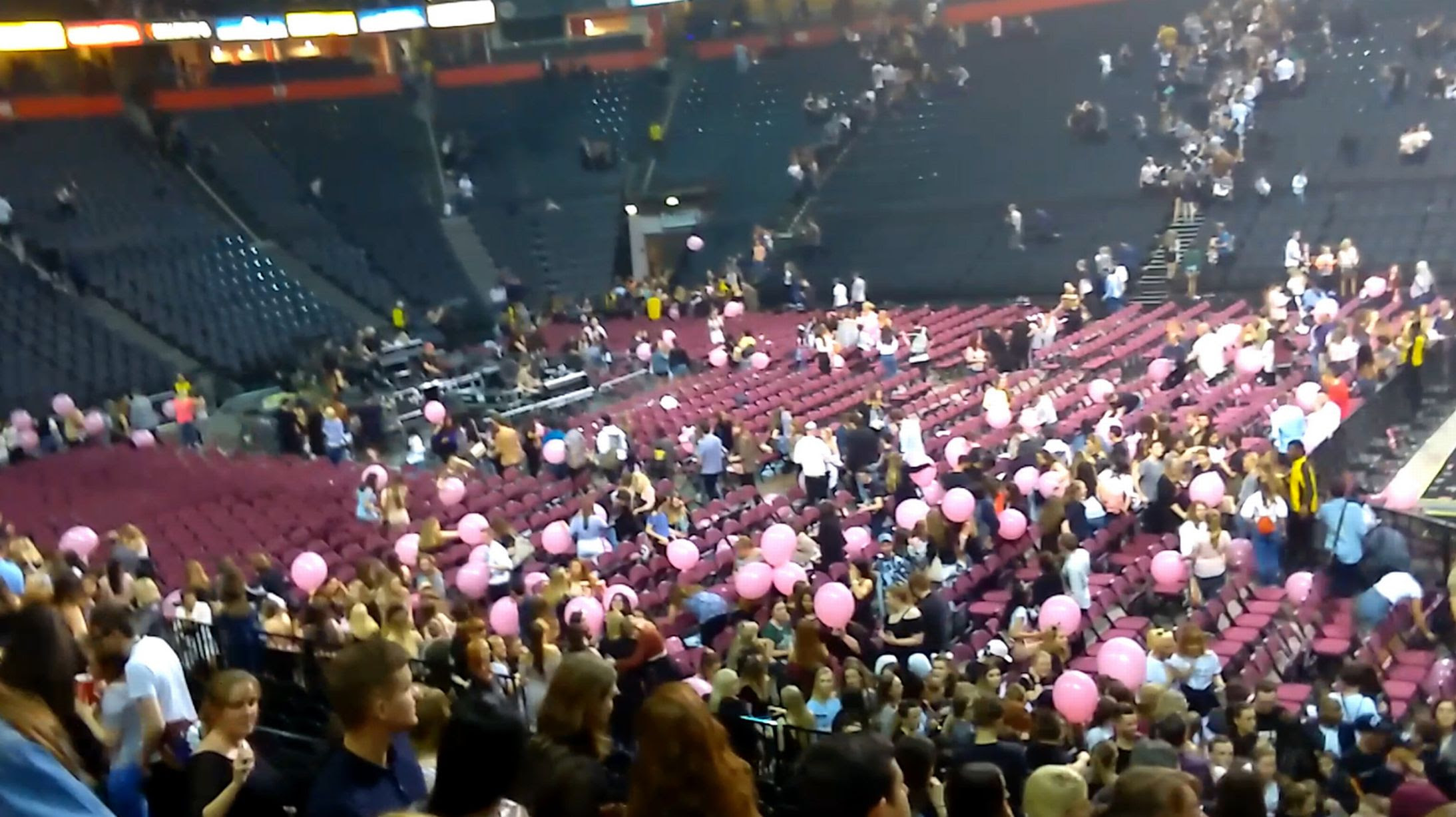 Yet again (cite France where a State of Emergency still persists) the event is conveniently used to support standing policy objectives: the return of Mrs May in the strangely U-turn General Election; the highest state of terror emergency; troops on the streets, on trains and at public events; the arming (and centralising?) of the police; increased government control of press and Internet; limitations on individual protections; support for more military intervention in Syria.

So whilst fully empathising with the people of Manchester and any and all who have been killed, injured or traumatised by the events there, it is vital that we keep a level and dispassionate approach, for we can be sure that is the distinguishing feature of the psychopaths behind these incidents, whoever they are and wherever they come from.

That is how "Gayle Fawkes" observations below, should be read.

Mass expressions of grief and support may be understandable and positive but we should also be very conscious as to how they can be manipulated by those in control to deflect from criticism where it is deserved; to distract from objective analysis; to support otherwise unobtainable policy objectives at home and abroad.

It was, I believe, a lesson that was not missed in Britain following the outpouring of emotion when Princess Diana was killed in suspicious circumstances. 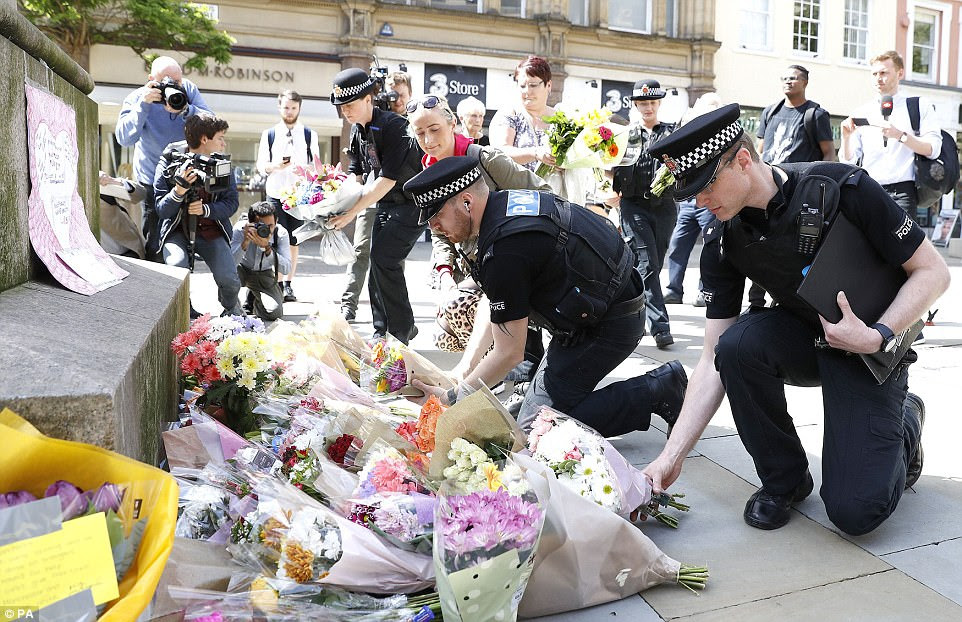 The very formulaic combination of mass gatherings, marches, prepared slogans, political leader's comments and appearances, to a common script, beds of flowers, services of hope and remembrance, foreign buildings lit in 'solidarity', minutes of silence, the use of pretty girls and iconic images, are far too resonant of the advertising industry for me to be comfortable with it.

Where is the old fashioned British approach, that treated tragedy with a respectful but genuine reserve? And then there is the very obvious contrast between the response to these events and those far more horrific in foreign lands, often caused by western military action, or indeed the daily list of routine deaths on the roads and elsewhere that are not sensationalised by the media.

Leaving aside all these considerations, and ignoring all the numerological (22?) and sociological ("Dangerous Woman" Tour?) features, I have a number of questions that never appear to be addressed let alone answered. And has anyone else noticed the strange coincidence that the attacker carries the same surname as Huma Abedin at the very centre of the Hilary Clinton revelations that effectively cost her the Presidency? 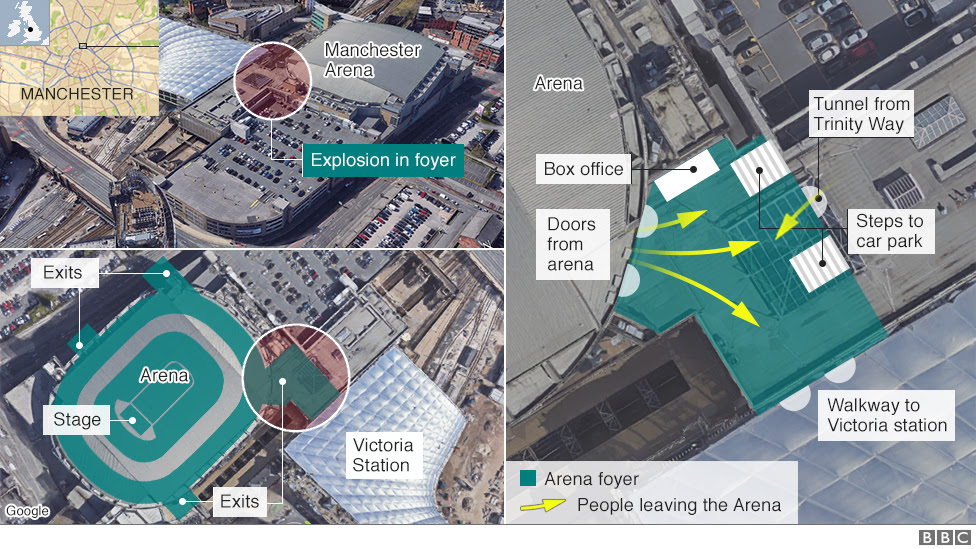 1. How was it possible, given the high state of alert nationally, particularly following Westminster, that anyone, let alone a well-know threat, was able to enter an obvious target? So what specifically was the police presence prior to the event and how was it organised?

2. The alleged suicide bomber Salman Abedi it is alleged, is the son of a MI5/6 Libyan asset, given sanctuary by the UK for his anti-Qaddafi stance, so was well known by the security services. Could this explain why numerous complaints and suspicions regarding Salman were ignored? Worse was MI5 or 6 in the know about the intended attack or even implicated in it?

Neither in the case of Westminster or Manchester is this far-fetched or irrational. We know for certain they did similar in the case of Northern Ireland and it is heavily suggested in regard to the 7/7 tube and bus bombings, but this is a truth that cannot be told or admitted by the political elite, as they take us ever further down the slippery slope to dictatorial disaster.

3. How was it that an American journal (the New York Times and reprinted in the London Times) the very next day, could confidently publish a plan showing where the bomber and his 22 victims died? If accurate as it purported, as it drew circumstantial conclusions on the basis of it, how was it possible to reconcile it with the video images of people escaping, apparently in panic, through that concourse? Or was that a different one? (See Sky report below.)

4. Why yet again, is there only distant video of emergency vehicles and a hint of an explosion when there must have been actual footage of the bomber in the lobby?

5. Who made the announcements on the public tannoy - he appears to have an American accent - saying there was nothing to worry about and no need to bunch up? Was he informed of the circumstances or not, given the possibility of other attacker and/or devices? And what were the exit routes for the many hundreds evacuated, if the lobby became a disaster area and crime scene?

6. How was it that despite a huge row of ambulances immediately on scene (where did they come from and when were they summoned?) and despite the deployment of an explosive device with all the risks of fire or other devices that this must have entailed, were the Fire Brigade not even activated?

Apparently it was only after an hour and half had elapsed were any units dispatched to the scene despite being only minutes away.

This is VERY strange, and the only logical explanation I can come up with is that they were not called because it was known in advance that they would not be needed. It was not part of the plan.

Of course even if 'ISIS' carried out the attack, it did not and could not control the response. The failure to dispatch fire units to an explosion is so contrary to standard operating procedures, it defies logic and explanation other than that suggested above.

The Sky report is here: https://www.youtube.com/watch?v=_w-7p0mX2_o

One year before in Manchester - the 'drill'! 
I've just read that someone's step son has confirmed on fb the death of his stepmother.
Ive just read that someone's step son has confirmed on fb the death of his stepmother.
What I find strange about the story is this
I've been to the MEN countless times. If the blast was right outside the event arena, how did the mothers die from the blast? Unless you have a wrist band, you can't go beyond a certain point.
Certainly can't go where they say the mother was with out a wrist band. It would mean you can try slip into a show if you're that far. You just couldn't with out that band on.
The #Manchester event follows the exact same patterns as all other false flag attacks, and to illustrate that here's a point-by-point assessment of some of the usual symptoms...
FALSE FLAG BINGO
- The perp had a recognizable ID on him (despite supposedly being blown to pieces... just like the magic passports on 9/11, Bataclan, etc...)
- There is no CCTV footage of the blast (pretty odd given how many camera's are at a venue like this)
- Lone wolf perp
- Massive reduction in civil liberties after the event with 5,000 soldiers deployed domestically the day after (a move that was officially planned in July 2015 "Operation Temperer")
- Crisis actors on scene
- A big shout of allegiance against all "terrorists" (thereby gaining national support for continued war in Syria)
- Perp was previously known ("According to NBC News, citing a US intelligence official, members of the bomber's family warned security officials about him in the past, saying that he was “dangerous”. http://www.telegraph.co.uk/…/everything-know-salman-abedi-…/
)
- Many conflicting eye witness accounts about the number of explosions (1 or 2), the sound being more like a balloon/gunshot/speaker breaking rather than a bomb. The interviews on BBC have also been conflicting (eg. one person talks about the bomb being in the same room as her despite the fact that she describes being in another part of the arena at the time)
- Killer is dead (nobody to interogate = case closed)
- No videos or photos of bodies from smartphones/camera's/etc, whether at the scene or hospitals etc (feel free to provide photos if I'm mistaken here, as I will humbly admit that I am wrong if there is undeniable evidence to support that).
- Masonic symbolism and numerology ALL OVER the news stories, as I've shown in many posts on my wall in the last 48 hours.
- Symbolic place & time = may 22nd which has 223 days remaining, which is 322 backwards (Skull and Bones). The explosion was allegedly at 10:33pm... masonic 13 and 33.
The key point to note here is this: WHO BENEFITS?
The answer to that is obvious when you consider the fact that the government had officially PLANNED to roll out military personnel in the UK as early July 2015 - see Operation Temperer, and this event gave them the perfect opportunity to do so, thereby stepping up the implementation of the totalitarian state even further.
--------------
For those who want to criticize and condemn me, you are free to do so, but please PROVIDE EVIDENCE to support your counter-arguments.
I welcome opposing views, but please keep in mind that I base my analysis only in ABSOLUTE FACTS and not hearsay.
If you can provide SPECIFIC and UNDENIABLE evidence and examples to prove that anything I say is wrong then I will very humbly accept that I am wrong. Just show me the evidence, THAT'S ALL I ASK!"
Posted by Veaterecosan at 16:50