Orlando Massacre: a very BIG problem!
Big holes in the story! (IF YOU LIKE, please pass on. The world needs to know.) 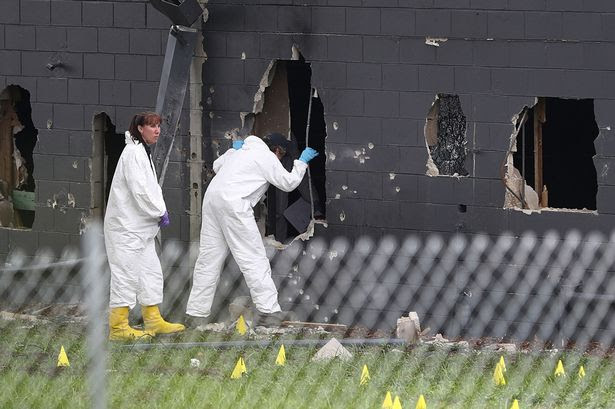 GETTY IMAGES
FBI agents inspect the damaged wall at the 'Pulse' Nightclub where it is reported fifty (including the gunman) died.
Let's get straight to the point. Any sensible person in the world by now must treat any claim of a "Muslim-related terrorist event" with the greatest degree of caution, if not scepticism. I have attempted in previous articles to point out the many incontrovertible irreconcilable facts that point to unreliability or even criminal fraud, the only conclusion of which is that dark forces within our own governments are following an evil agenda of fear and recrimination.
Now we have an event in Orlando where it is claimed "at least 50" (now 49) have been shot dead  and another 53 seriously injured. I could discuss the many familiar story lines and treatment that are common with earlier ones and particularly the Bataclan - a policeman 'engaging the gunman' inside the building; that he took 'hostages'; the varying descriptions of the gunfire; how he was shot 'as he exited the building'; claims that he was a member of 'ISIS' and a radical Muslim; how he was well known to the police and FBI yet allowed to buy guns; suspicious recorded interviews and pictures of injured people being carried away; 'product placement' in these; 'heroic' police action saving lives; huge media coverage and political grandstanding in the context of elections. 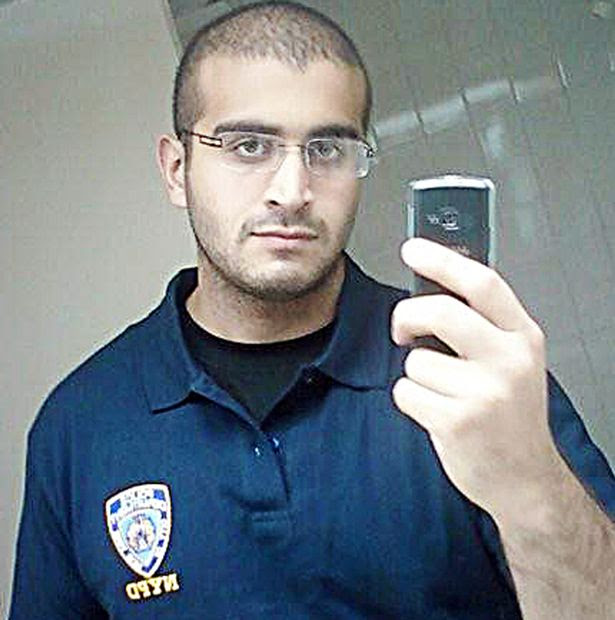 http://www.mirror.co.uk/news/world-news/horrific-orlando-nightclub-shooting-images-8177083
In this case the emotive case of gay rights has been suspiciously tapped into and exploited with the now familiar expressions of 'solidarity' and visual 'rainbow' displays. Even the Radio 3 'Breakfast' programme joined in before 9 am with the playing of 'Over the Rainbow' in memory of the event! I hope the people of the world are not stupid enough to fall into this trap of mass psychological conditioning and manipulation but I fear they will be.
However leaving all these aside and not engaging with the thorny issue of how many were actually killed, by whom and why, yet again I was struck by some completely inexplicable features of the event that cannot be dismissed or argued away and which clearly point to pre-planning and fraud on the part of whoever organised and carried out the event. Please note I am not saying that people may not have died. I am saying that not only can the official version not be trusted, it is quite impossible that it happened in the way described.
I was immediately struck by the speed with which the list of the victims (and in many cases their photographs) were put out by the Orlando authorities. Yet again TIMING is an essence in determining whether this was a wholly genuine or contrived event.

As you can see below, despite reports in the Guardian newspaper that ten (10) deceased people had been identified by before 06.04 London time (01.04 local time) (Orlando is five hours behind London time) (see below) by 7.33 London time (2.33 Orlando time) the City of Orlando had already published a detailed list of twenty three (23) victims. There is also confusion over the repetition of some of the names. (See highlighted below)
This gives rise to concern and questions for several good reasons.

First this was the middle of the night. Presumably all the city employees except emergency services were away from work so who did the enumerating and checking before putting out the list within literally minutes of the attack.

Second, Police never issue names of dead and injured until identification has been confirmed and usually until next of kin have been informed. Yet again we see instantaneous information widely published suggesting pre-planning.

Third, we now know - or have been told - that the police did not storm the building until 05.00. So the quite obvious question arises how they knew with some confidence of at least 23 named victims two and half hours before they entered the building, not to mention that as important crime scene it would have been left undisturbed for some hours.

I do not know when precisely the press was reporting "at least 50 killed" but it could not have been done until 5 am at the earliest. I would be prepared to put money on the fact that the media had been briefed according well before this juncture. I expand on this point below and add an even more damning one.
So the TWO clinching timing issues that PROVE the account cannot be relied upon are as follows:
The BBC reports the "attack began about 02.00 local time". Note "the began". In other words, given the description of the sequence of events, the gunman engaged inside by a policeman, taking hostages, the police assault team not entering until 05.00 when it is claimed the assailant was shot dead as he at that point, attempted to leave the building.

So, it would have been physically impossible for a confirmed list of the dead to have been known and published before 02.33 when it was published by a British newspaper.
To emphasise the point, the first named ten victims appeared in the same British newspaper at 06.04 (01.04 local time) so these people were identified and named one hour before the attack was even alleged to have begun!

(Just one question for now: if the police did not break in until 5.00 am how was the Orlando City able to circulate confirmed names and ages of the dead from 2 am? From this time the total (50 later amended to 49 though strangely if you include the shooter its back to 50!) and many of the individuals are identified BUT note again the incident didn't START until 2 am and access to the premises wasn't gained until 5 am. None of the film footage gives any indication of dead people outside so how can this be explained OTHER THAN the list and its publication was planned in advance? If there are any other explanations, please let me know.)
THIS IS QUITE PREPOSTEROUS AND MUST MEAN THE REPORTS ARE PHONY IN SOME WAY OR OTHER!
Now as if this was not enough to prove there is something seriously amiss here we have other unassailable PROOF for which we must again thank the Guardian. (See below) It reports that in Melbourne, Australia, Victoria's 'Equality Commissioner', Ro Allen, leads a minute of silence for the victims of Orlando, and pledges "We will not fight hate with hate."
This is clearly a publicity stunt put on by the Government there. The only trouble is that it happens at least an hour and a half before the event is said to have started on the other side of the world!
Melbourne is nine hours ahead of London. London is five hours ahead of Orlando, Florida. Therefore Melbourne is fourteen (14) hours AHEAD of Orlando. Yet the Ro Allen press announcement is date/time stamped 14.35. That is 00.35 Orlando time or a full hour and a half before the attack is alleged to have started let alone finished.
Yet again Melbourne stars in the very questionable dark arts of espionage and all that jazz, whilst leading the popular field of 'gay rights' and 'equality' politics. (Ro Allen was only appointed in the summer of 2015, and here she is already starring in a world tragedy in which Muslims are again targeted for propaganda purposes)
IN SUMMARY AND TO CONCLUDE: the timing of these reports prove conclusively that the events as described cannot be relied upon for integrity and at the very least the event and the people affected must have been agreed and circulated in advance.
BBC REPORT (verbatim)
From: http://www.bbc.co.uk/news/world-us-canada-36511778
"A gunman opened fire at a gay nightclub in Orlando, Florida, killing at least 50 people and injuring dozens before being shot dead by police. What do we know about what happened?

"How the incident unfolded

"The attack began at about 02:00 local time (06:00 GMT) on Sunday.
"Pulse, which is one of the biggest nightclubs in Orlando, was holding a Latin-themed event that was nearing its end when a man opened fire. There were more than 300 people inside at the time.
"He had an automatic rifle, so nobody stood a chance," said Jackie Smith, who saw two friends next to her get shot. "I just tried to get out of there."
"At 02:09, the nightclub posted on its Facebook page: "Everyone get out of pulse and keep running."
"The attack began at about 02:00 local time (06:00 GMT) on Sunday. There was an exchange of fire with a police officer working at the club, after which the suspect took hostages.
"At 05:00 a police assault team went into the club after police received text messages and phone calls from some of the hostages. Mateen was killed in an exchange of fire."

Orlando Florida is 5 hours behind us. Therefore the FIRST names of the victims referred to below - actually part of the 23 in the official list at bottom - must have been issued by 01.04  local time AND OBTAINED BEFORE THIS I.E. BEFORE THE EVENT EVEN STARTED!

The city of Orlando has confirmed the names of another five victims. They are: Deonka Deidra Drayton, Alejandro Barrios Martinez, Anthony Luis Laureanodisla, Jean Carlos Mendez Perez, Franky Jimmy Dejesus Velazquez.
Only a few minutes before this report (6.45/1.45) thGuardian reported thus: "The aftermath of the worst mass shooting in American history is, for most, an extended, uncertain nightmare. Police have only identified ten of the 50 killed early Sunday morning. More than 50 more are injured. Many families have taken to social media to circulate missing posters." This does not fit with the list of 23!
07:33

For those of you waking up to this story, here is a break down of what we know about the Orlando shooting so far.

Link in the Guardian Report above. Please note however the first names were issued an hour before this. Clearly impossible if the attack did not even start UNTIL 02.00 and the police did not storm the building until 05.00! You will note the date stamp does not include a time. This is calculated from the time the link and report appears in the Guardian.

Guardian report of announcement in Australia an hour and a half prior to the 'terrorist event' even starting in Orlando!

Victoria's equality commissioner, Ro Allen, leads a minute of silence for the victims of Orlando, pledges "We will not fight hate with hate."